February 15, 2012
This past January I organized and ran MIT's 26th annual 6.270 Autonomous Lego Robotics Competition. Basically groups of 2 or 3 students are given a box with Lego, a microcontroller, motors, and sensors, and they have just 3 weeks to put together and program a fully autonomous robot to compete in a game.

Here's the first part of the final competition video:

Part 2 is on MIT TechTV


This year's game was about capturing territories and gathering resources, on a hexagonal playing field: 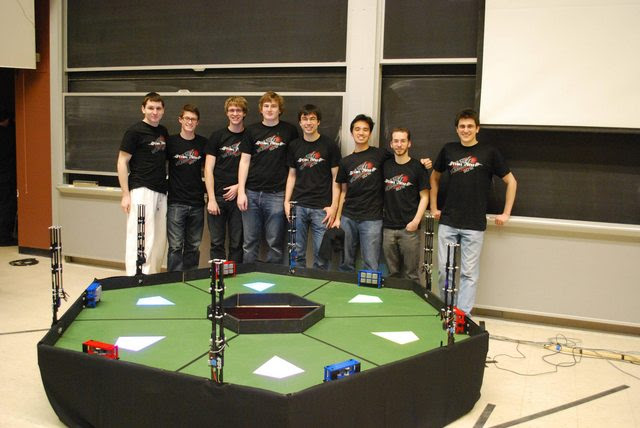 The organizing team with the playing field

Robots had to spin a gearbox to capture a territory: 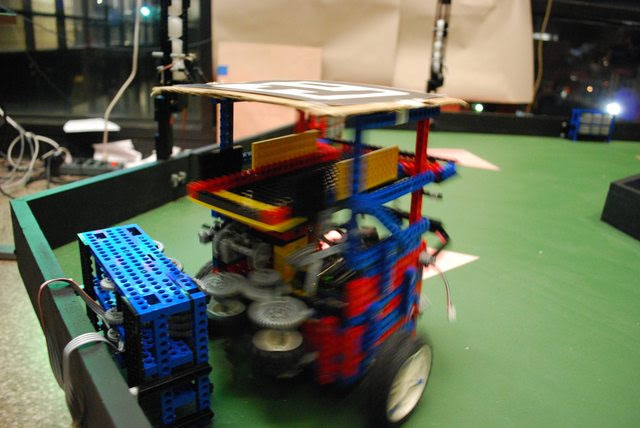 Then they could collect ping pong balls by pulling a lever: 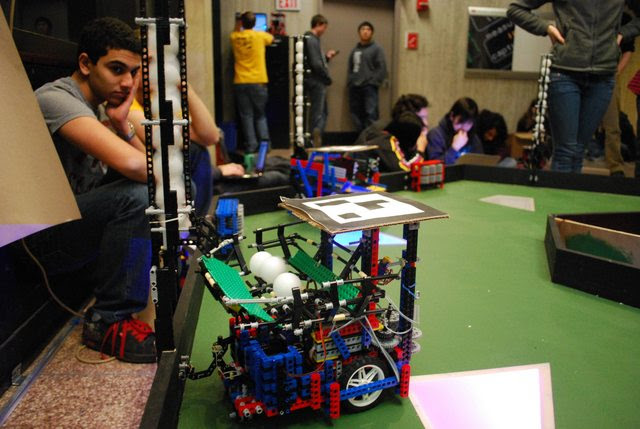 And then dump them on their half of the center: 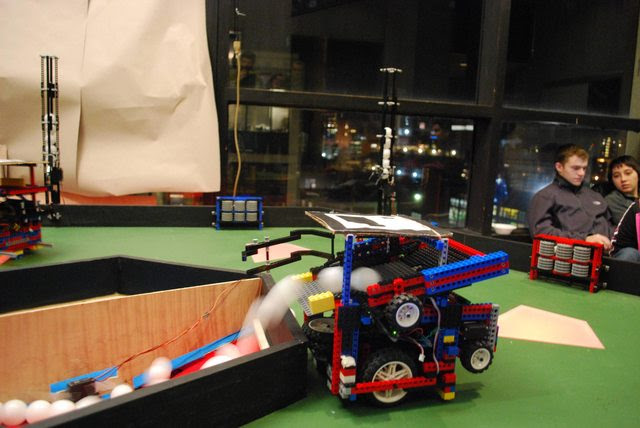 One of the robots actually shot the ping pong balls into the center: 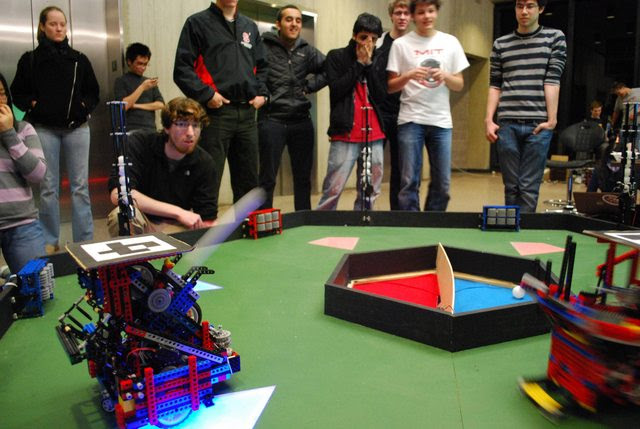 But the really cool part is that 6.270 is entirely student-run - the organizing team that I led had about 8 core members that took care of everything from ordering Lego, motors, and electronics, to developing lectures and labs to teach the basics of autonomous systems to the ~60 students enrolled in the class. We also design the game itself (playing field, scoring, etc), and interact with companies to get sponsorship for the competition.

We were really ambitious this year, making a hexagonal playing field rather than the usual rectangular one. One of the organizers was able to CNC-cut the plywood: 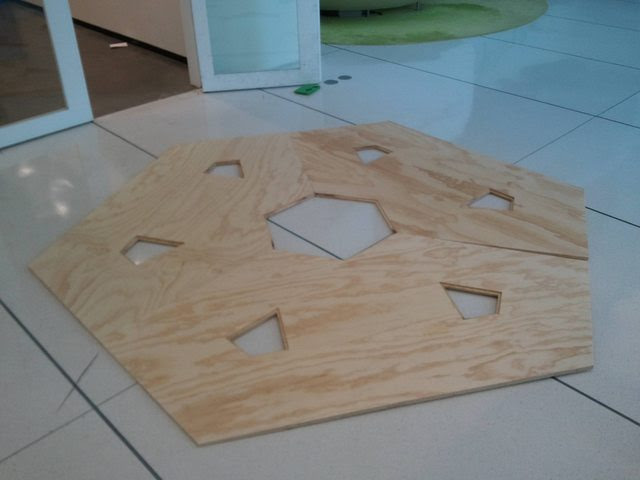 I did all the electronics in the playing field - programming a microcontroller to read the quadrature encoders on all 6 of the gearboxes, sensing the breakbeams attached to each lever, and controlling the 6 servos that dispensed the ping pong balls. This interfaced with the "vision positioning system" computer that wirelessly transmits each robot's location along with the score, who owns each territory, and how many balls are remaining in each territory - which the robots could use to make decisions.

We also integrated LED lighting in the table to indicate which team owned each territory (using my friend Joe's ACRIS LED controllers): 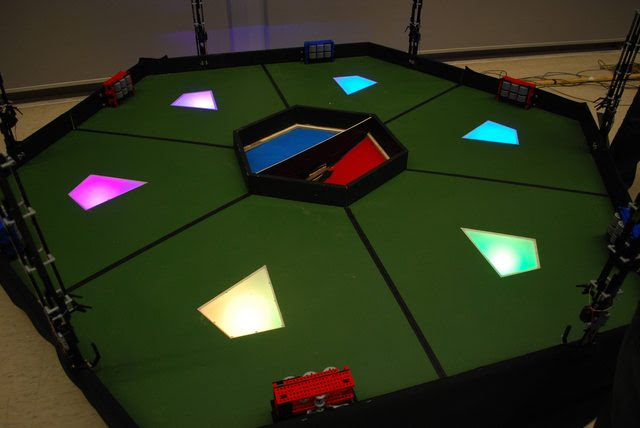 When we weren't giving lectures or helping contestants with their robots, the organizers had time to build a robot of our own. One of the cooler robot drive systems is omni-drive - each of the wheels are actually compound wheels, made out of a bunch of smaller wheels around the circumference. The smaller wheels are placed perpendicular to the drive direction of the large "wheel", so that it can roll sideways. This allows the robot to strafe in any direction and rotate in place (or both simultaneously). Here's one of the LEGO omni-wheels I designed: 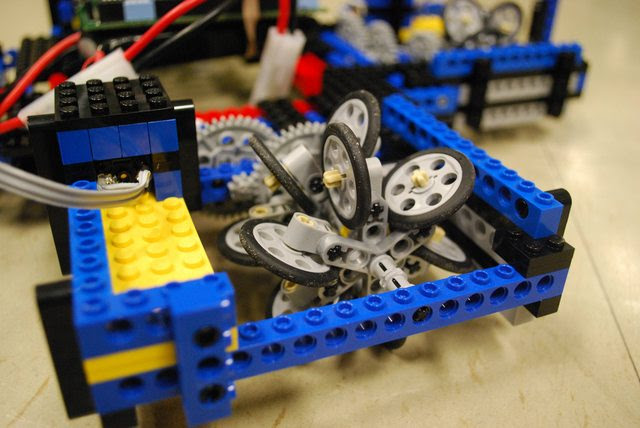 And here's a video of the omnibot in action:

Running 6.270 was a really fun & rewarding experience - I got experience lecturing to a large group of students, learned about the HappyBoard's embedded software, hardware, etc, learned how to do basic PCB layout work on the HappyBoard, taught myself OpenCV to create the vision positioning system, utilized my 6.111 knowledge to do some FPGA programming, interacted with reps from Apple, Oracle, Dropbox, and more! 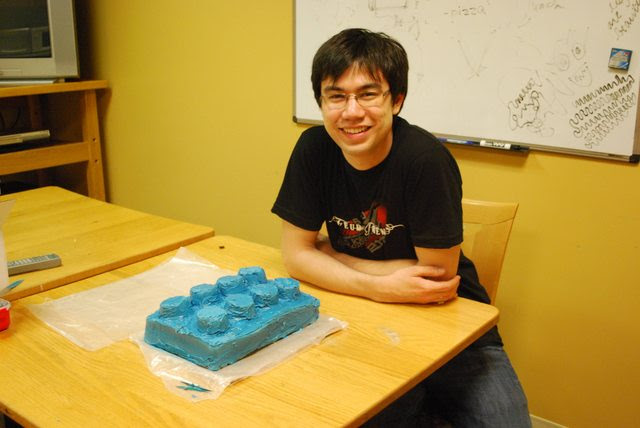 (My girlfriend made me a LEGO cake after the final competition was over!)

That's all for now. You should watch the final competition video - there were some really amazing robots this year!